This is an extract from the diary I wrote when travelling in the Galapagos. 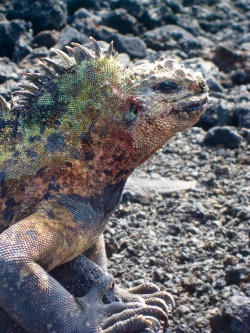 I woke to find that thankfully I wasn’t very tired at all from the previous day’s escapade, so we headed off to Isla Fernandina where there were enormous groups of marine iguanas a smattering of baby sea lions which were simply adorable. Sadly one of them had had some kind of accident so its ear was hanging off in a rather gruesome fashion… We also saw some iguana fights- they nod their heads in a very strange manner and make their ‘fight call’ and wrestle with their heads in a rather fierce way. We also saw another rare sight: 2 american oyster catchers changing duty of their nest, in which was nestled a large egg.

There were also about 7 flightless cormorants and they spread out the remnants of their once flight-giving wings which looked rather peculiar as they are now so small and useless to them-ah, evolution. That is actually one of the main things I like about the Galapagos; how you can see the effects of evolution right before your eyes, and by exploring there gain better understanding of the interactions between environment and the creatures that reside there.

On the way to the island, we saw a cormorant dive then re-emerge holding a huge, wriggling fish in its beak which we all got very excited about! I liked the jetty where we were dropped. Enclosed in mangroves growing out of the water, it looked like something out of an adventure book and reminded me of the carnivorous island featured in ‘Life of Pi’. I’m not sure the others thought it was quite as magical as I did, but we know my imagination tends to run away with me a bit!

On the island there were skeletons of turtles, Nazca boobies, iguanas and even one from a huge kind of whale or shark. There were lots of lava lizards skittering about the place, helping to keep the flies off the sea lions who were basking in the sun. There were also lots of maroon-coloured, pointed sea urchin stumps left from when buccaneers used them as pens to mark stones. During that day’s snorkelling trip I followed a shall of beauty fish with electric colours by myself for a while, and then we saw a magnificent sight of a rock protruding from the waves, covered in blue-footed boobies! At last! Again, it got me thinking about evolution- what benefit could blue feet possibly have?!

We then meandered off on the boat until we reached the ‘nose’ of Isabela island (Punta Vicente Roca) and anchored beneath an amazingly huge red cliff with little signs of life everywhere-a pretty harsh environment to say the least.

We went snorkelling in a cave nearby where I could see hundreds of sea turtles resting on the bottom of the seabed and occasionally came to swim around us to investigate the strange creatures who dared enter their cave…having said that, they are so serene and relaxed that I think it was pure curiosity that spurred this on! Legend tells us that pirates once hid treasure in the cave- but unfortunately we found no gold or jewels to take home! 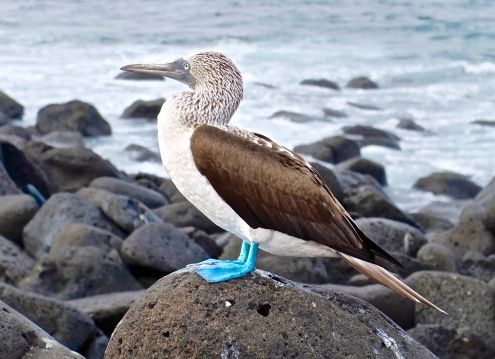