We had a marvellously large breakfast, and feeling about 2 stones heavier, we set out to explore Sydney. First we walked around the quay to the Opera House, of course stopping to take multiple photos along the way (none of which were masterpieces as it was pretty cloudy whilst we were exploring Sydney) and looked in amazement at the fabulous architecture of the Opera House. It was very strange to look at Sydney Harbour bridge as it is almost identical to the Tyne Bridge at home!

It didn’t really feel like we were on the other side of the world. 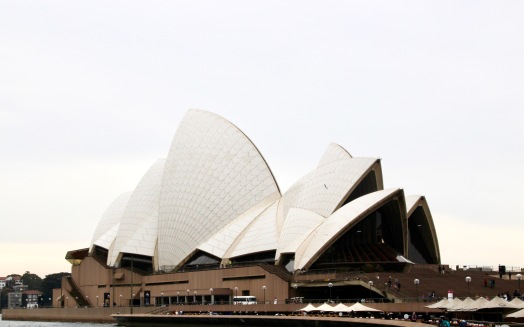 After the Opera House we wandered around the Botanical Gardens which I really liked, as it was nice to see some greenery.

We went to the National gallery where we saw an exhibition on Aboriginal artwork which was really interesting; whilst the work and designs may seem simple on first glance, they are actually incredibly complex and highly meaningful. The mostly depicted stories of the Dreamtime and were done by artists with Aboriginal backgrounds. Every dot, every strip of bark, every simple wooden stick told a tale.

I particularly remember the model of fruit bats, and one of 2 antlers which suspended a coal necklace between them in the shape of Tasmania, mimicking the traditional shell necklaces of the Tasmanian Aboriginal women. I really enjoyed the exhibition!

We continued through the garden to the NSW Museum- it was a bit of a mixed bag, but  there was a great exhibit about the reinstating of Aboriginal rights and the ‘Stolen Generation’.

That evening, after a spa session, we wandered around the quayside and saw all the exhibits for Vivid Sydney festival which were simply incredible, and gave me a great opportunity to practise shooting with my DLSR. I especially liked the crazy swings and the neon waterfall. There were so many photographers out with massive cameras and tripods, so I felt rather inferior…I managed to get some decent shots though, so I didn’t feel totally hopeless!

The Opera House looked amazing- the patterns projected onto the sides were all sea-themed. One moment there would be giant anemones waving their fronds, and the next there would be sea creatures wiggling their way across the huge sails in a pretty majestic fashion. I watched the cycle of designs more times than I can count!

We had dinner at a quayside grill- a couple of cocktails and some yummy food topped off the evening perfectly. Then, it was off to our lovely beds in the splendid Shangri-La for a much-needed snooze!

Sydney feels like a cross between New York and a Spanish city in its architecture and design of infrastructure. It seems quite far behind London’s mixed and modern atmosphere, and perhaps seems slightly lacking in cultural points of interest.

Nonetheless, is has charm, but I feel that without the Botanical Gardens, Opera House and Bridge, it would not hold an awful lot to entertain- from a tourist’s point of view. However, I didn’t manage to explore the suburbs of the city so that view is solely based on the central & main parts of Sydney.